Jonathan wants to be a cheese stick for Halloween

So all three kids want homemade costumes this year. Lillian wants to be a mint ice cream cone.

Anna chose to be a bubble gum machine. And Jonathan is going to be cheesestick. Do you know that there is one cheesestick costume on Google for a kid?

So I looked at cheese sticks in the fridge. He really wants to be a white cheesestick not a Colby. So thankfully one of my neighbors threw out a 4 by 8 sheet of Styrofoam that was three inches thick. So I cut it into a block. So he looks like a gigantic eraser marshmallow.

And this morning I took some elastic and stapled it and taped it to the back of said marshmallow. He says he loves it because he can kick it while he walks.

I am that Mom that I want people to know that he has a cheese stick.

I called up Horizon who after bunch of searching said your best bet will be to search the internet fot a picture.  So I copied and pasted pictures into paint and increase the size by 130% twice.

And because it is a cheesestick I wrapped it in Saran Wrap to keep the pictures on and be so there's not a bunch of little snow balls around the house. He loves it. Mommy win. 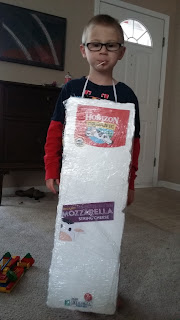 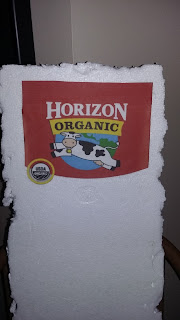 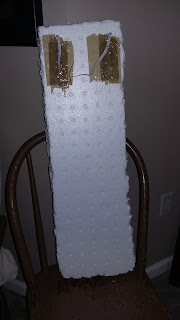 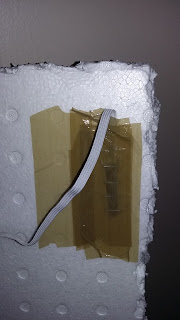