All 3 kids are in school full time now.  I had such great plans.  I would paint some bedrooms, organize the kids rooms and fill up Goodwill.

I caught up on Facebook.  I have walked Maple 3 mornings in a row. 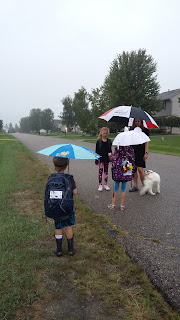 Today it was sprinkling but not bad so I made Maple walk all the way around the neighborhood. Then I wanted to plant a couple plants.

Well...3 hours later I had planted 11 new plants, removed half the daisies, moved the white strawberries, some red flower, weeded the asters.  Then I decided that bed by the house along the sidewalk  needed to be lowered 6 inches.  8 wagons later of dirt it was down to a good height and I put the soaker hose in. 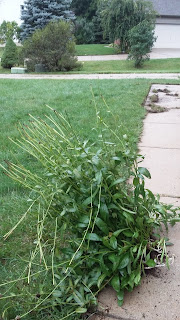 Maple thinks she is allowed to dig as much as I did.  And then there were the baby turtles.  First there was one.  I put him close the pond so Maple or Little grey would not end up with it attached to their nose.  Then there was another little guy who looked like he was coming out of the siding.  He brought a friend.  Back to the track I went. 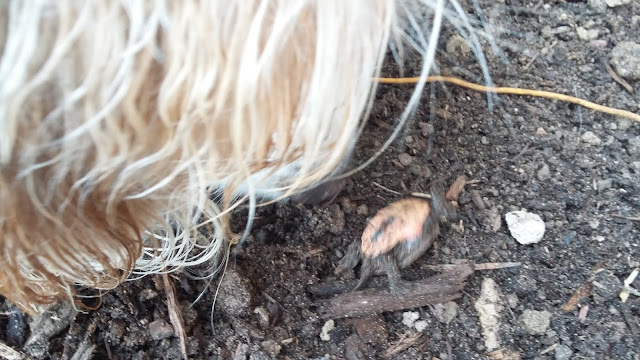 Then there was the thing that made me scream.  A toad or a frog.  He got to move himself.

Rain and dirt was all over me and the dog.  When we went into the house I finally caught her and gave her a bath.  The water was muddy ans I used so much soap.  She has a knack to run around the house like a crazy banshee.  I just hosed myself off.  Doggy life. 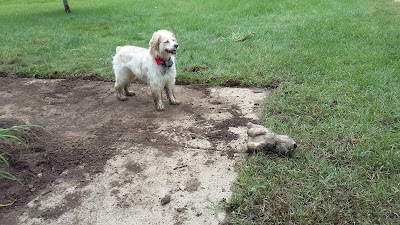